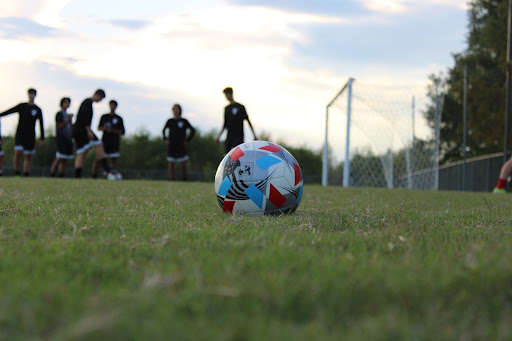 Photo taken by Blake Taylor. Players warming up in the background of a soccer ball on the CCHS practice field

Senior Night. The game is a rematch from this past spring when the Wildcats won by a score of 3-0.

After the seniors were recognized, the game began. The first opportunity came early when Anna won a free kick just outside the 18 yard box. Anna whipped the ball in and scored, but was called back because of an offsides penalty.

“All of our defenders were on the opposite side of all of their offenders”, said Alex Vanwinkle, the goalie for the Terriers. “When the ball was played in, normally the person in front gets there first, but [Anna] got there first and we got lucky [because of the offsides].

The first goal of the game came a few minutes later in the 29th minute as Nathan Torres shot the ball into the net.

“I had a missed opportunity earlier”, Torres said, “I had to make it up for [the team]. I dribbled past [the defenders], and knowing that the Anna goalkeeper is good, I had to put some power on it, and put it in the corner”.

The whistle blew at halftime 1-0 for the Terriers with the lone goal for Torres. As halftime adjustments were made, the game then continued.

Carbondale went on the attack, which paid off as in the 57th minute junior midfielder, Carter Snowden, scored another goal outside the box to make the score 2-0 for the Terriers. The scoring wasn’t finished yet as a few minutes later, senior Pedro Ramos scored to make it 3-0.

With a few minutes left in the game, Terriers coach, Jeff Hanson subbed out the 4 seniors as they went off the field with a standing ovation from the Terrier faithful. The final whistle blew with a final score of 3-0 with 2 seniors scoring a goal, and Vanwinkle getting the clean sheet with senior defender TJ Person helping.

The coaches and the players reflect on the performance and preview the next match up vs Anna,

“It was a really good win”, said Coach Hanson, “we see them in two weeks at regionals. It will be an even match up

in two weeks. They know what to expect from us”.

“We need to improve our physicality”, Torres said, “we have to connect cleaner and make better passes with more aggressiveness”.

Nothing less, it was still a great game for goalie Alex Vanwinkle as he got the clean sheet for

“I think [the clean sheet] means a lot to him”, Torres said, “he has performed well for us throughout the years and I’m really proud of him”.

It was a very special senior night for everyone on the Terriers and Coach Hanson is very thankful for what everyone has done for this team.

“These guys have meant a lot for this program”, Hanson said, “everyone has played for at least 3 to 4 years on varsity”. “The time that they spend through the summer [and the season] with workouts and running is a lot and for them to get rewarded on their night by getting a goal and a shutout, I am really happy for them”.

The Terriers will be hosting regionals on Tuesday, October 19, at 6:00 PM. Admission will be $5 for everyone in attendance.