What’s Wrong with Being Black?

Being black is like the best thing ever. It feels good to be different another then being just like everybody in my opinion. I sit here and I watch all the African Americans getting killed and racially profiled because of what their skin color is. Black, white, blue, orange it doesn’t matter. Nobody should have to go through of being identified by the way they look automatically assumed they are bad person. We can’t just simply walk down the street before we are assumed, we are stealing or caused some trouble. It’s wrong for black people in live in nice houses because we don’t make enough at least that’s what the white man says.

Me, I’m black, African American. But a lot of people who formally white think I cause trouble because of the color of my skin. I’ve been playing the violin for many years, 10 years to exact, and when I have a competition or a concert people, they think I don’t know how to play, or don’t know why I’m there and for me to have to explain to them why I’m there, shows their ignorance because the same reason why your there I’m there. Everybody is not raised the same way formally known as being “ghetto” or “hood”. Everybody didn’t grow up in the same household. And I can tell that me and my best friend grew up in different lifestyles. Yes, we might have the same similarities, I’m sure everybody does, but we aren’t the same.

It’s like black can’t have nice things. Because in the white man’s eyes we can’t afford anything because we don’t make enough, or we aren’t smart enough because of the kind of job we have. My grandmother is a nurse still more than 20 years and she has a nice and nice 3-bedroom house, and she lives alone. It’s just feels like it’s against the law to have things and work for want and earn for what you have.

And it feels like the more we fight, the more they shoot us down and kill us. We protest, we die, we talk about it, we die, it’s like we can’t do anything to protect our own. Mothers are out here worried about their children out in the streets. Mother worried about their son just playing outside in the yard feared that her is going to be arrested for nothing or worse and that be killed. And that one little thing can change a person life no matter what they did. People must realize the things they do and think about because what’s it’s done it’s done there is no coming back. I think about Trayvon Martin and Michael Brown, their mother can never tell them face to face that they love them or ask them how their day is going or tell them that they miss them. They can never get those days back. All they can do is sit and think about their child and why did it have to happen to them.

My godparents are gay, and they have mixed baby. My godmother married a white woman and since my godmother is black, they had a mixed baby. And not only being black is a problem, being mixed is a problem because you have the white side and the black side. My god sister, I don’t ever want her to have to defend herself because she has two moms and one who happens to be black? It’s like the police must be more restricting on us or must be harder core because they feel endangered. How do you get a cellphone compared to a gun, shoes to a gun, a brush to a gun. Not everybody has a gun and me personally I’m afraid of them because of they do to people who look like me? Nobody should feel threatened by me. I’m a nice person, I’m small. I’m 5’1 ½ and weight 127 lbs. If a person fears me that is a miracle. It’s like some things happen and it shouldn’t even get to that point. My cousin who is black and a police officer said that we don’t have to combative all the time but at the same time, the police officers shouldn’t be rough because they do handle us any type of way and they just through us like we are nothing.

Black have been going through ever since the earth was made. Going to through slavery and segregation and now this. Yes, we knew we will go through some hatred, but u didn’t think it would still be this bad. People are just disrespectful. And now they don’t rarely ever talk about in the schools. When I was middle and elementary school went to textbooks and the internet and movies and my great grandma and I asked her about slavery, and she told me what her grandmother told. It’s like we are going through the pain and the hurt and it’s like it’s never ending. 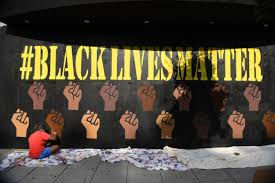