Portuguese Forward for Juventus Cristiano Ronaldo is known for always being an offensive threat, whether on the counter attack, off a cross, or from as set piece. His freekicks combine power, accuracy, and dip, and when executed perfectly, are virtually always going to go in. A knuckleball is a free kick that changes direction suddenly to throw the goalkeeper off, while minimizing ball movement for increased power.

Ronaldo’s freekick masterclass is challenged by few, and a grand example of this is Manchester United vs Portsmouth in 2008. He was 30 yards away and lined up to shoot. The freekick combined great power and curve, and the goalkeeper had ultimately no choice but to let it sail in. Since then, I’ve never doubted CR7 whenever he lines up to shoot the set piece. The title of the tutorial might be a little misleading, as I am no Cristiano Ronaldo; however, I can break down his technique and replicate it for a similar result (with minor adjustments).

25-30 yards is ideal for hitting a knuckle, as the ball needs time to change direction. Step back as you normally would for any set piece, but this time, you want to balance yourself on the balls of your feet. When running up to the ball, you want to face your laces towards the ball, as that is where the contact will be made. You want your plant foot as close to the ball as possible, and you want to make contact right below the center of the ball. You do NOT want to follow through, so to prevent this, when the ball leaves your foot, hop off your planting foot, and land on your shooting foot where the ball previously was. 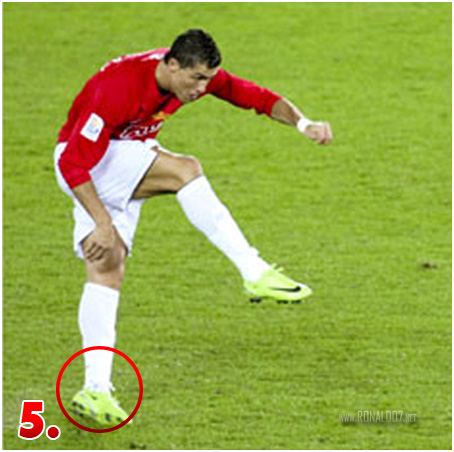 If you are still having issues with your technique, practice the hop step without the ball. You shouldn’t worry about hitting the ball hard if you can’t prevent the ball from spinning. Also, your body should follow through the motions with strength; no loose ankles or knees. After you have this down, all you must do is practice; CR7 stands out from the others because of how consistent he is, which is only because of practice!